Where did the Hyena Find that Python? … 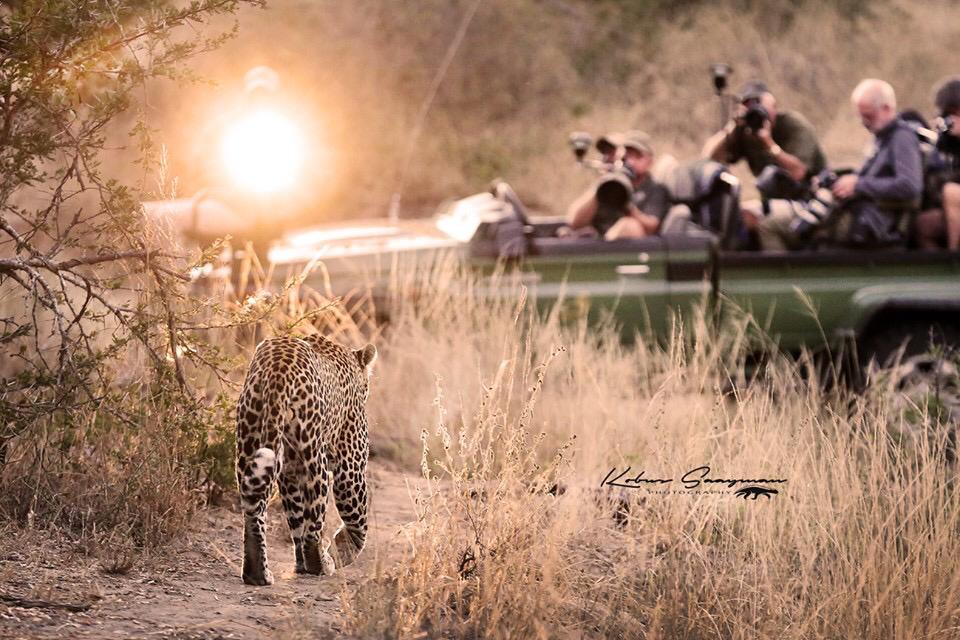 Hoping to find a leopard again we left the Lodge early to find tracks. And again we could see tracks everywhere! Because we often chat to the Safari Live Guides we contacted them and found that within a radius of around 500 meters, four different leopards had passed during the night. So it was not surprising that we could see their tracks criss crossing again in all directions.

We tried to figure out which tracks were the most recent, and planned to follow these. Then we heard monkeys alarm calling, but we couldn’t find any predators lurking close to them. But our second vehicle did spot a single lion a little distance away. We photographed him, and during that time we heard kudus alarm calling and a few moments later the monkeys called out their warnings again.

This time we found very fresh leopard tracks, and the monkeys started to call frantically. We split up to form a pincer movement as we approached the area, and that payed off. We found the cause of the disturbance – a female leopard. She moved through and open area next to the Lodge. She made her way directly to the remains of an impala kill. We could not work out where it had come from? Had it been hers and hyenas stole it, and she wanted to claim it back? She continued to feed until there was nothing left. 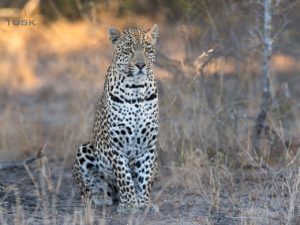 The next moment the impalas started rutting next to the leopard, and as they were filled with adrenaline and concentrated only on the adversary in front of them, they were unaware that she was a few meters away. But she was too slow, and they finally did notice the lurking danger before she attacked, and they ran away. 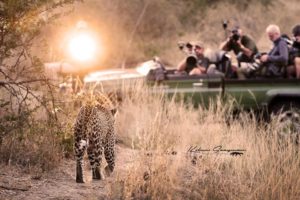 Being our final full day we were determined to find another leopard. During our break at the Lodge we noticed a young bushbuck running all alone around the Lodge area. The mother was nowhere in sight, and we wandered if a predator had taken her.

A herd of elephants kept us amused and entertained for quite a long time. A youngster was full of energy and had lots of cheek. He dashed back and forth, ran up and down the road, and trumpeted his presence as he went. He was far too young and cute to be intimidating but he certainly tried! The reminder of the herd carried on feeding, relaxed and unconcerned as the youngster dashed around noisily. 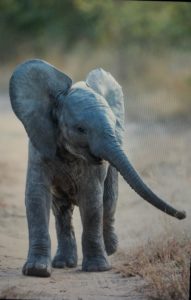 We continued our drive, watching some fresh tracks and spotted drag marks across the road. Our tracker followed the drag marks and found a hyena and a dead python. Again we were unsure if a leopard had killed the python and the hyenas stole it. That was what the tracks and drag marks indicated, but we could not be certain. Whatever the story, we spent quite a while photographing the dead reptile.

We decided to return to the male lion that we saw in the morning. Soon he was up and started calling for his coalition partner. Then he got up and walked down the road, giving us numerous opportunities for wonderful photos. When he settled down again it was in an open area, where we could continue adding to our growing collection of spotlit images.

Tomorrow is our final morning at Djuma, and even if we don’t manage to find a leopard on that drive, we have been so very lucky, and our memory cards are filled with wonderful shots …