What did the African Harrier Hawk Catch? … 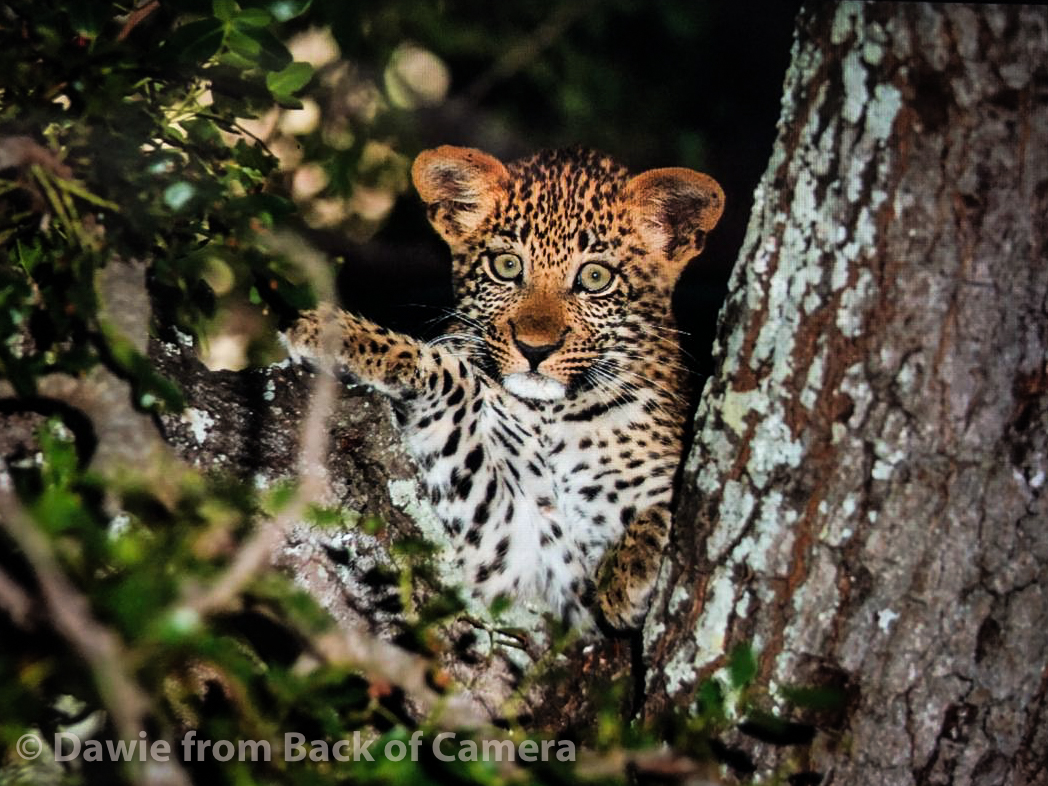 Being our final full day on this safari we were out bright and early and hunting for the pride of lions that we photographed late yesterday. We found tracks close to the Lodge and started to follow them. Then we heard the unmistakable sounds of baboon alarm calls. We followed the sounds and could see lion tracks everywhere, but to our surprise we found not the lions but the couple of mating leopards.

Because the leopards were on an open plain in front of the Lodge we spent some quality time photographing them as they continued mating. They were right next to our vehicle and we were able to get some fine close ups of the two. 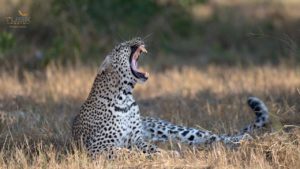 We did a loop to allow another vehicle to spend time with the cats. As we drove around we spotted a large herd of giraffe. They looked really wonderful against the early, colourful sky.

An African Harrier Hawk was next. He was hunting in some dead trees. He repeatedly pushed his talons into spaces in the trees and pulled out various types of prey to eat. At one stage he pulled out what looked like a bat, and devoured it quickly.

This afternoon we tried to find the leopard with the single cub again. We spent ages searching and could see nothing when our tracker pointed into the far distance. We looked, searched and took out our binoculars. It was the leopard cub, up in a tree. 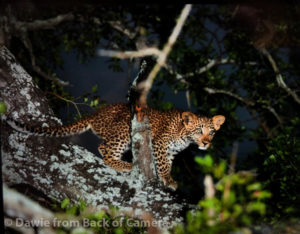 We drew closer, and with a brilliant dark blue sky with a few tinges that hinted at sunset, the stage was set for some adorable images. We were the only vehicle in the area and we remained with the youngster for the entire afternoon. And wow! Was it ever worth it! The cub was very active, and prowled all around tree. Every rustling leave was stalked, every bird became possible prey, and any insect was chased. She kept busy until dark. Anything that landed, perched, or moved in the tree became a target. It was fabulous to watch. 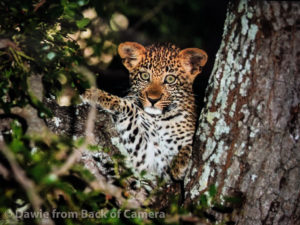 As night approached we moved on and saw a pod of hippos in a dam. Then we returned to the lions. They were sprawled around on a dam wall, and once again we used different and creative lighting to compose different, interesting photos.

During the night and early morning there was quite a deluge. Within moments we were damp! Or soaked may be a more accurate adjective.

We headed directly to where we saw the very active cub alone on the evening game drive. She was with her mother, close to a waterhole. They walked along and played in the rain, and although it was difficult to photograph, it was a wonderful experience to watch the two together. When they reached a termite mound they settled to rest. But then the mother spotted a Scrub Hare and chased it. We were a little surprised when the mother carried on walking after failing to catch her prey, leaving her cub alone and quite exposed on the termite mound.

When we returned to the Lodge our guide spotted a Boomslang. Being quite an expert he was able to grab it and place it on a convenient branch for photos, with a warning not to try this at home! We used wide angle lenses to capture the amazing moment.

After an amazing trip, crammed with fabulous sightings and wonderful memories, everyone is understandably reluctant to leave this paradise – with all promising to return as soon as possible ….