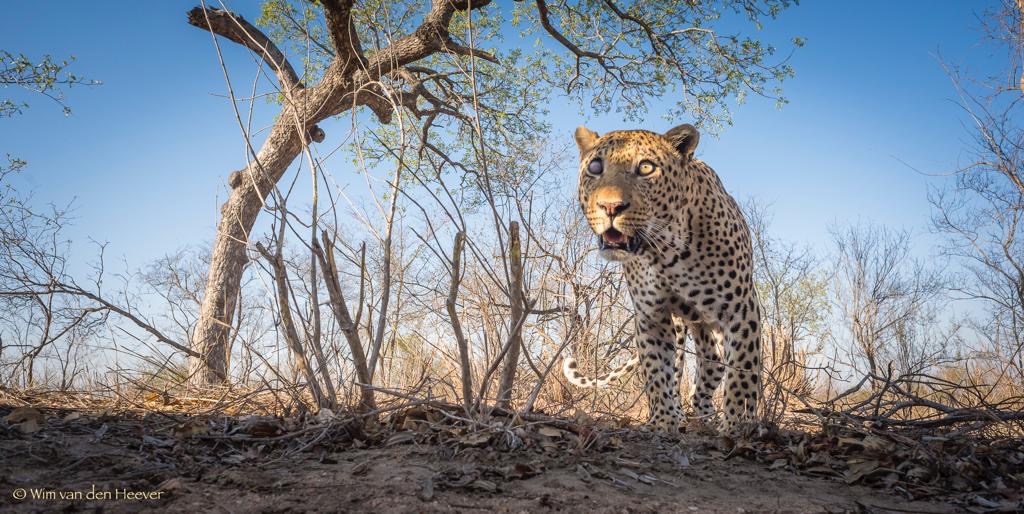 The heatwave decided to hang around a bit longer – and as always it is a mixed blessing. Temperatures with very little wind meant that plenty of fluid was needed for anything living, making sightings near and around waterholes a certainly.

We looked around in the morning, and photographed general game like impala, giraffe, zebra and of course we saw plenty of elephants. 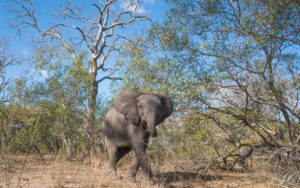 After a while we found three leopards – Xidulu, a leopard mother with her cub, accompanied by Hukumuri, that huge, handsome, powerful male. We could see a kill in a tree that probably belonged to Xidulu and cub, and all three leopards lay within a twenty meter radius under the tree. It was great to see all three together, and the magnificent male gave us plenty of photo opportunities when he moved around quite restlessly. 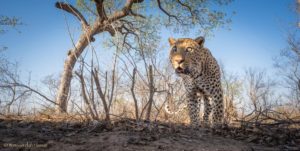 Because it was rather hot we returned to the camp for refreshments and aircons.

Our afternoon game drive started with a visit to various waterholes. We knew that elephants and buffalo would take full advantage of any water and mud, and of course each waterhole had either elephants splashing and drinking, or mud-covered buffalo lying there and turning occasionally when the mud dried, to immerse themselves in cool wet mud again.

We returned to the three leopards just before sunset. Hukumuri was high up in the branches of the Marula Tree with the kill. He just lounged there on a branch, with a violet and pinkish-orange sky behind him. What a picture! The sunset was quite stupendous, and we remained with the handsome leopard until dark. At one stage he kept our cameras very busy when he made a show of coming down from the tree. He also moved the kill around from time to time. He picked up the whole impala carcass each time, stood there and looked around for a more suitable position where he could stash it securely.

Our vehicles then elected to go in different directions. One vehicle came across a large pride of lions and shortly after, they completed the Big Five tally for one game drive when they spotted some Rhinos. 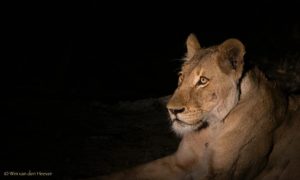 The second vehicle visited the Elephant Plains open area where Tiyane lay on a termite mound, relaxed and enjoying the evening before she started her busy nighttime patrol, perimeter checks, and maybe even a hunt – all the leopard nocturnal tasks.