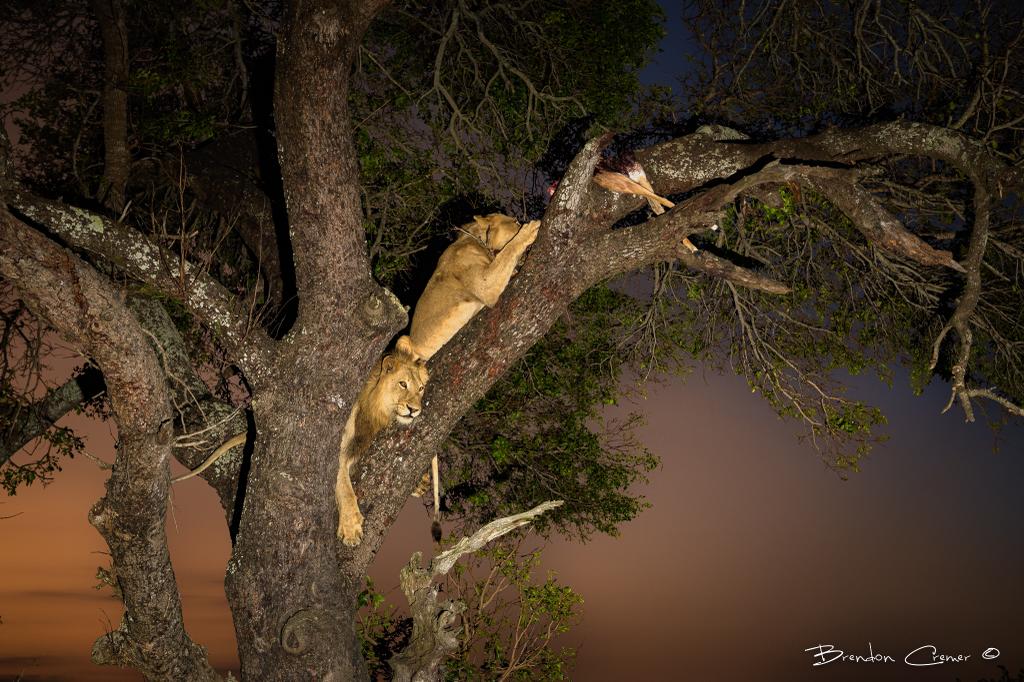 What a year this was! Over the past 12 months, we experienced countless excellent wildlife sightings and photo opportunities! One could hardly wish for more. But as the season was slowly coming to an end, 2022 had one more fantastic sighting in store for us.

There’s never a shortage of beautiful sightings during our Sabi Sand Photo Safari. However, on our last Elephant Plains tour of the season, we were treated to what could be the most fascinating sighting of the year.

And it all started on a relatively quiet morning…

It was shortly after the rain. Big cats like to hunt at this time, and we grew suspicious they must have made a kill somewhere.

We had been looking for Tiani, Sabi’s beloved female leopard, and her subadult daughter, Laluka, for some time.

The youngster was already about 18 months old and spent most of the time alone. Her mum, though, would still call her when she made a kill.

It had been a day or two since we could not find their tracks, so we checked their usual hideout spots. They like to spend time around the riverbed close to the camp.

And that’s where we saw a couple of hyenas chilling out. But why wouldn’t they choose a shady spot? It stroked our curiosity, and we set on foot to check the place. Very soon, it became clear why.

Finally, we found Laluka guarding her kill up in a beautiful Boerbean tree. 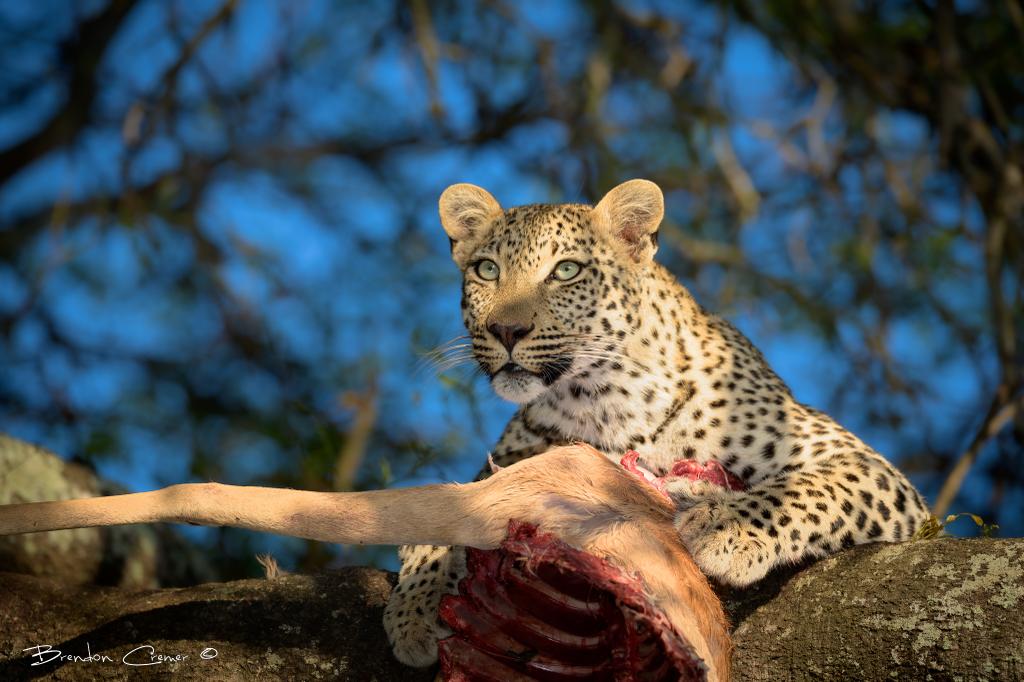 Wasting no time, we returned to the car and drove to the tree. We saw Tiani and Laluka use it several times before.

Now we could see what kill Laluka was savoring – it was Impala and its lamb! The kill was fresh, and not much of it was eaten yet. So they must have killed them the previous night. But there was no sighting of Tiani.

We watched Laluka lying on the large branch while hyenas were moving around the bottom of the tree, keeping the leopard alert. The early morning light and the blue sky enhanced the already beautiful scene and created a lovely photographic setting.

Suddenly, Laluka’s gaze focused in one direction. In the next minute, her mother walked into the sighting. It was time for Tiani to climb up the tree and feed off the kill and for us to press the camera shutters.

It is always a treat to watch the unique relationship between the two. And not only because of the photo opportunities. But what great shots we got that morning!

After a while, it was time to move on and see what else we could find. 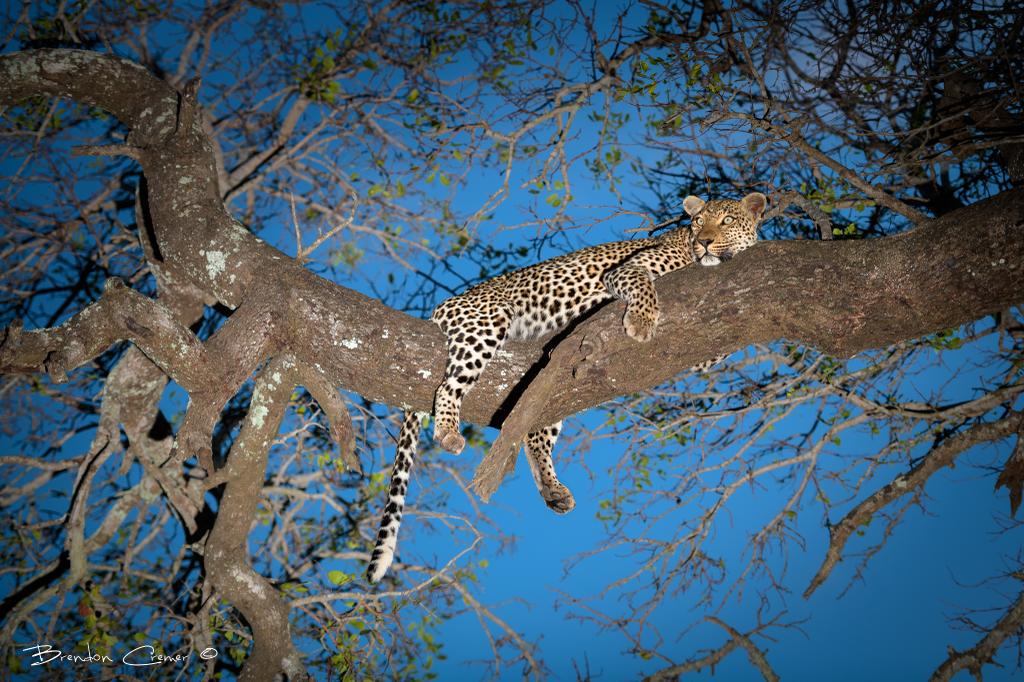 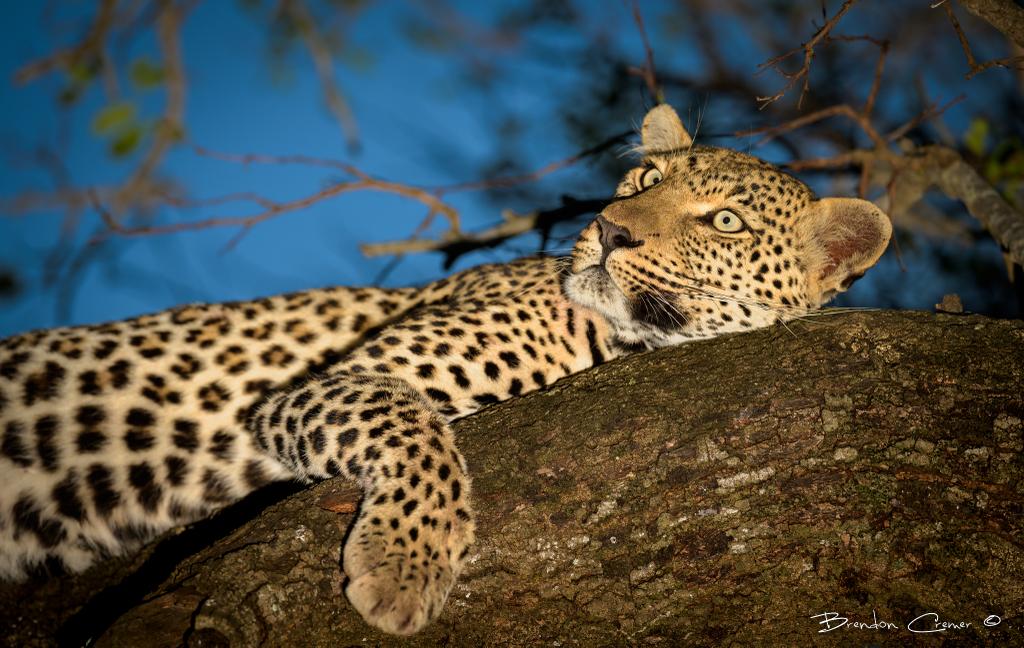 It wouldn’t take long before we came across a pride of old subadult lions that broke away from another pride.

As we kept following them, we realized they were slowly making their way towards the area where the leopards had their kill in the tree. What if they reach the tree? It was hard not to think of the exciting idea of a possible confrontation and interaction this would lead to.

But the day became warm soon. Finally, the lions decided it was time to lie down and get some sleep and for us to return to the camp. By then, the lions were already close, about half a kilometer away from Tiani and her daughter.

So our plan for the afternoon drive was clear – we were heading back to the leopard tree!

Back to the leopard tree

We found both leopards up in the tree, having a nap. They seemed to eat well during the day.

As soon as the temperatures cooled down, just before sunset, the voice came through the radio. The lions were on the move again. And they are heading towards us.

The humming in the vehicle gave away our excitement. That was, though, shortly after, followed by a bit of disappointment as the voice on the radio informed us that the lions turned around and left the area through the bush where a vehicle could not follow them anymore.

Still, we enjoyed the company of the two leopards and made great use of the incredible setting created by the setting sun. The red sky, in combination with the camera flesh, makes for beautiful images. From the photographic perspective, it was a perfect scene. 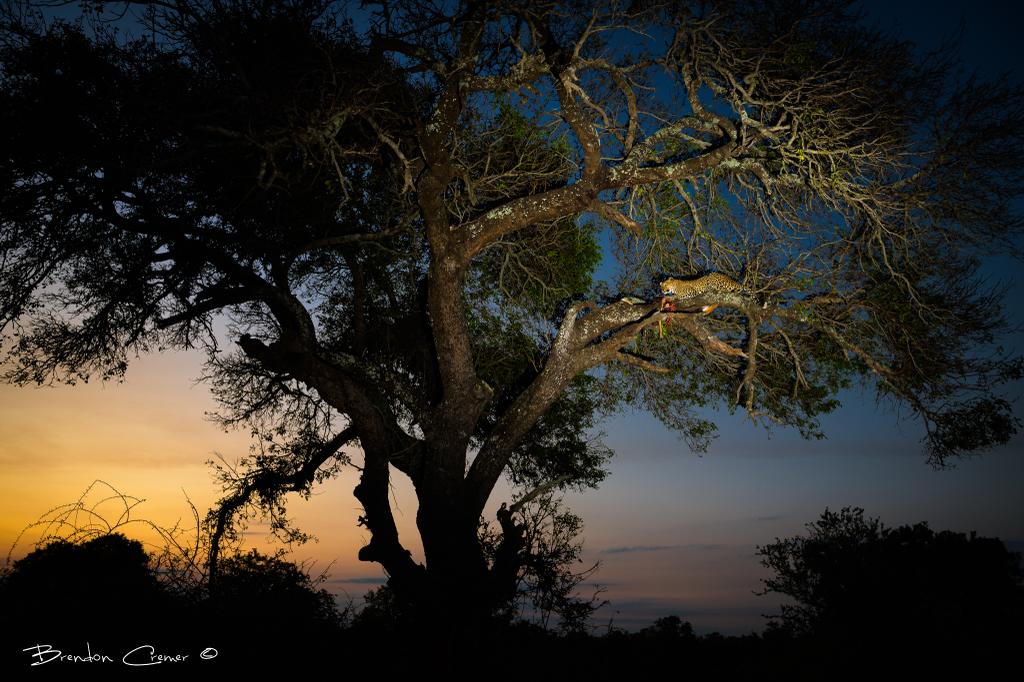 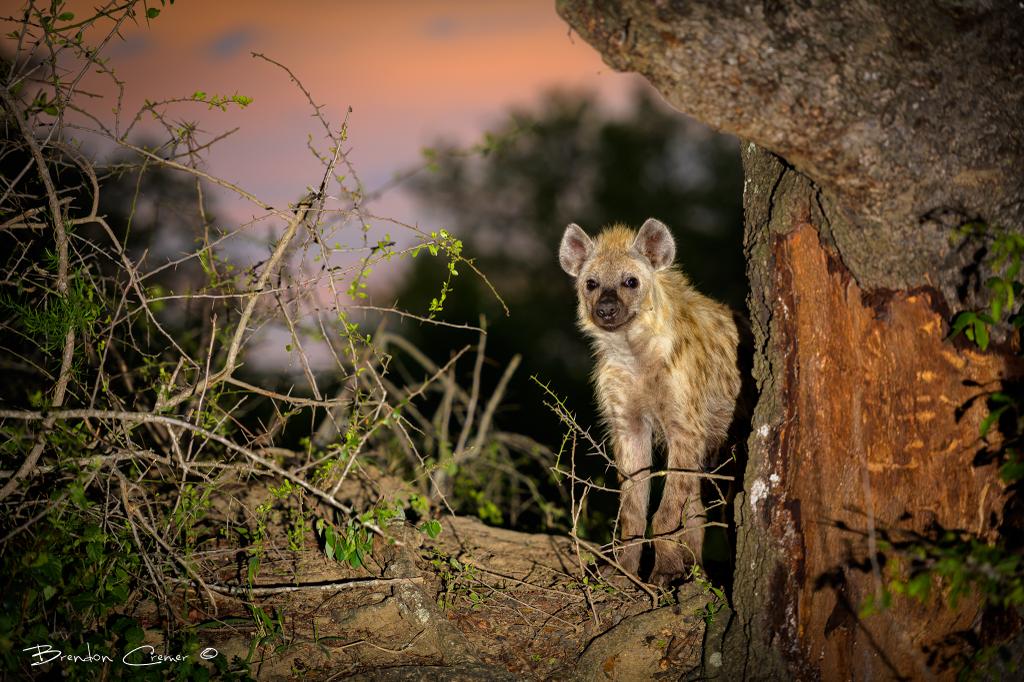 What happened next surprised all of us, especially the leopards.

Unexpectedly, the whole pride of lions appeared from nowhere, running towards the tree.

In seconds the previously serene scene turned into chaos full of gargling and roaring. Hyenas, lying until then around the tree, scattered into the bush. Tiani and Laluka jumped up and disappeared at the very top of the tree, holding onto the thinnest branches that could handle their weight.

Meanwhile, lions at the foot of the tree were impatiently looking up, busy trying to figure out how to reach the impala carcass.

It’s no secret that tree climbing is not the lions’ favorite activity. This particular tree, though, was on the large termite mound, which would make it relatively easy for them.

To our even bigger surprise, some of the lions really began climbing the tree in inelegant style, scrambling on the branches at the bottom. We kept watching them, shocked and amused at the same time.

The three of them managed to get up and steal the kill, which caused a whole new havoc among the pride. Lions tried to steal the kill from each other while navigating between the vehicles parked around the tree.

Unfortunately, by this time, the sun had disappeared behind the horizon, and darkness and chaos turned into challenging conditions even for the most skilled photographers. 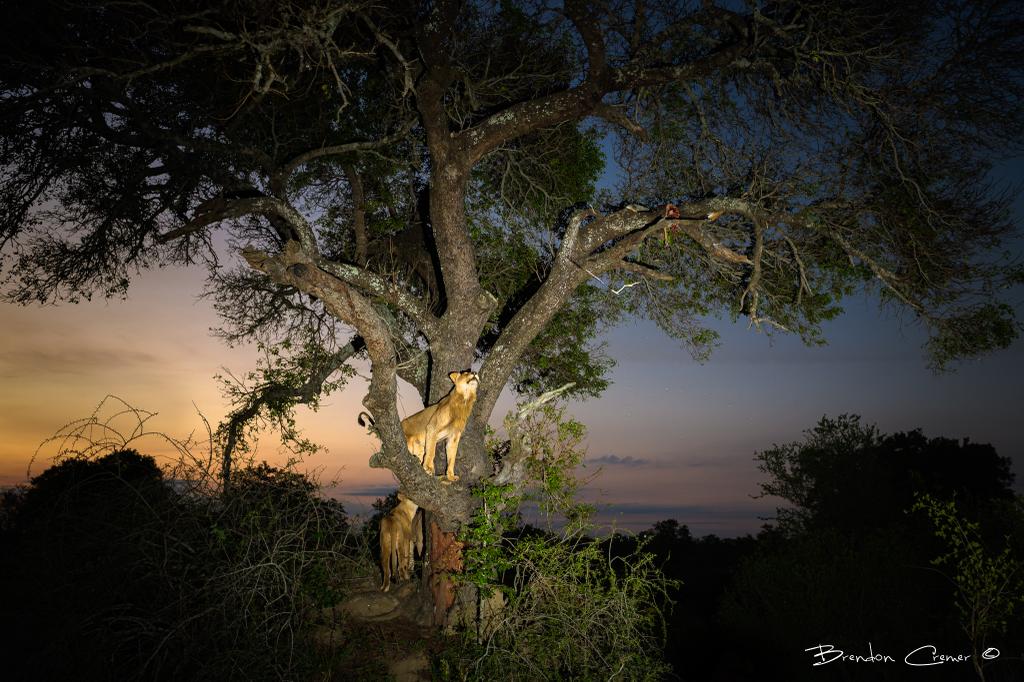 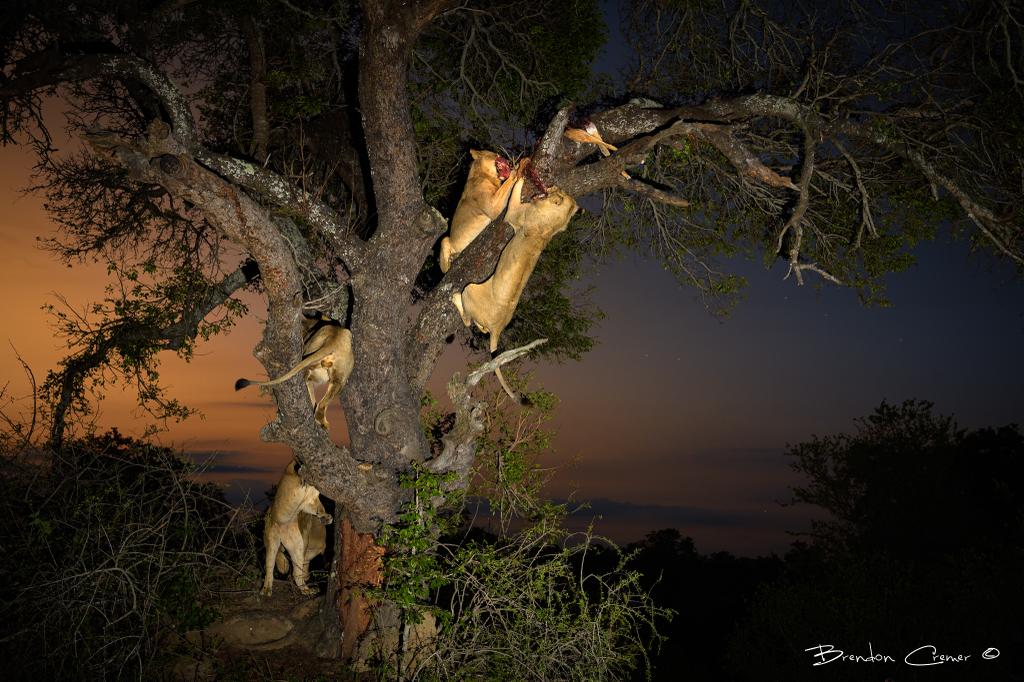 Eventually, the lions finished off the kill and moved on, leaving the leopards and us behind.

Not long after, Tiani and Laluka came down as soon as they felt it was safe. They looked around the area a little bit to see if any little pieces of their kill were left. Unfortunately, most of it was gone, and they also headed off separately their own way.

And so did we, spending the entire drive back to the camp processing what crazy, mind-blowing sighting we had just witnessed.

It’s still hard to believe it today. But, it was a sighting you don’t experience every day, nor once a couple of months. Looking back at the photos, I see how lucky we were to be at the right time in the right place, and I cannot wait to find out what surprising wildlife sightings 2023 brings. 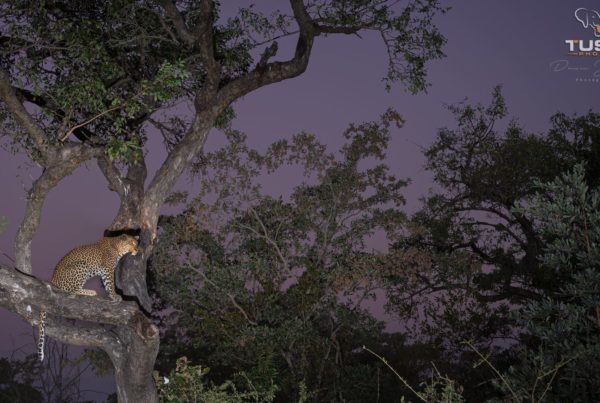 Dawie Shares his Notes and Photographs from the Elephant Plains Photo Safari:   Well, the…
Karen Denton 0 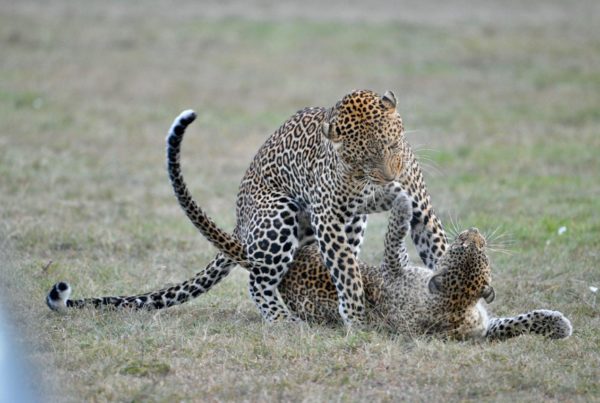 Our Amazing Intro to Masai Mara! …

Brendon's News from the Masai Mara Predator Photo Safari: We all met at the airport…
Karen Denton 0
Elephant Plains
March 29, 2019