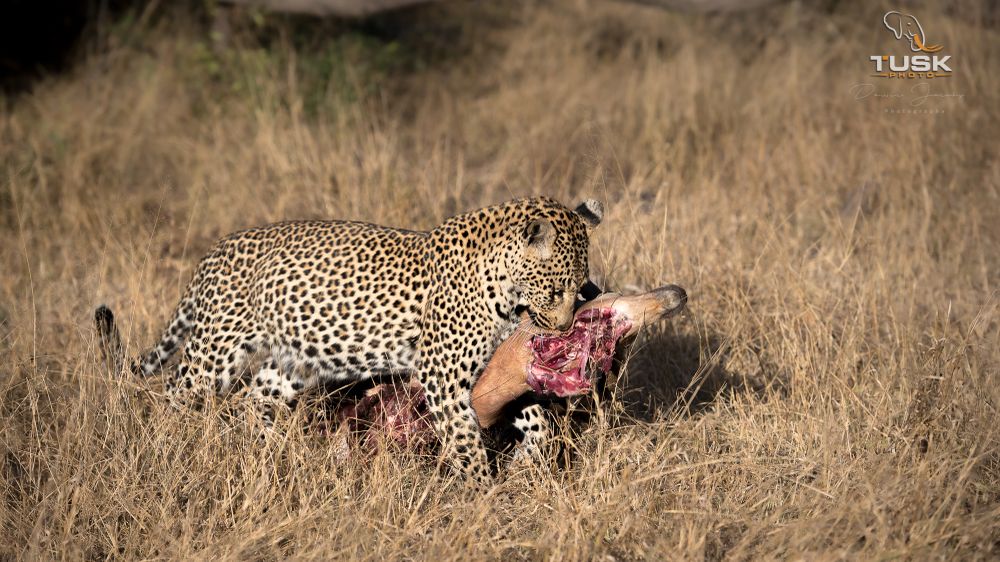 After a break in communications, we can take off where we left off before.

If you recall from before, we had seen the leopard, Tiyane, during our morning drive and decided to head in that direction. We had hardly left the gates of the Lodge when we spotted fresh drag marks in the road. Our trackers were wonderful at following these, and sure enough, it wasn’t long before we found a kill – but no leopard in sight just then – and we realised that the kill had been stolen by hyenas that lurked around furtively.

Aha! The hyenas didn’t have the kill for very long, however. There came the rather disgruntled cat, and within moments she had secured her kill again. Oh dear! As she looked around and started to drag the kill to a safe area, there came the hyenas again! And of course they outnumbered the hapless leopard and were able to steal the carcass yet again. At this, the rueful cat slouched along to a waterhole where she spent the remainder of the afternoon. 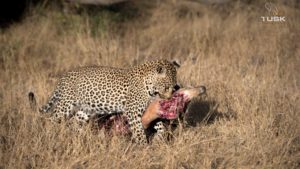 We left the leopard to rest at the waterhole and continued our drive. And it was a fine decision because we were in luck and soon encountered Tortoise Pan, a male leopard. He was on patrol, busily checking his territory. When he passed a pond he stopped for a quick drink and then resumed his busy evening schedule. 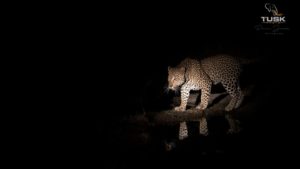 Then he spotted a herd of impalas, and decided that it was time for a meal. He started to stalk them, but partly because it was late and partly because we did not want to spoil his chances by using lights, we wished him luck, and returned to the Lodge, stopping very briefly to see what a couple of hyenas were up to, followed by a brief pause to photograph nightjars again.

The morning brought a mist that covered the landscape. What a beautiful setting when we found wildebeest and photographed them in that eerie mist. And it seemed like moments later that lion tracks took us directly to some active lions. 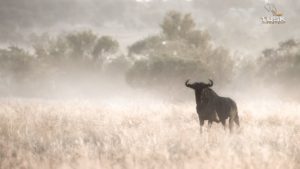 Excitement! The lions were hunting! With tall grass around them, light beginning to shine through the mist, the scene was as beautiful as it was thrilling. The big cats were very keen to get close to a herd of impala, and although conditions looked favourable for a while, they had no luck.

We hoped that the lions would hunt again, but they were exhausted and keeled over to sleep.

While we photographed a rhino in a lovely open area, we received an update about a nearby leopard and hurried there. She gave us a brilliant show. She strolled past our vehicle many times as we pulled ahead again and again to make the most of her presence. Eventually she disappeared into a drainage line and we returned to the Lodge to prepare for our new guests …