Sibuye and Cub Langa, and then Wild Dogs on our First Full Day at Elephant Plains in the Sabi Sand Game Reserve …

We arrived at Elephant Plains before lunch and after our introductions and briefing we were ready to start our first drive. We faced a hot, humid day with temperatures hovering around 37*. Because of the heat we were a little apprehensive about sightings. But what a super start to the safari.

We passed plenty of Plains animals, and noticed that there are tiny impalas everywhere. They are so cute as they totter quite nimbly to keep up with mom.

We were told at lunchtime about a leopard with two subadult Cubs, and we gradually made our way towards them. As we approached the area we heard a bird alarm calling again and again. We followed the sound and found the mother leopard on the bank of a river. Sibuye was on top of a termite mound, and you can believe that our memory cards filled really quickly even though the sighting was slightly obscured by a few small twigs. 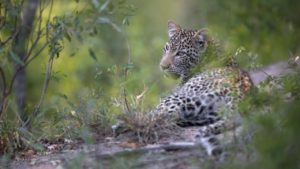 Then suddenly another face popped up out of the grass close to the termite mound. The young female cub named Langa gave us enough time for photographs before she languorously joined her mother on the mound. There was no sign of the male cub, but we were more than delighted with the two we could enjoy.

We moved our vehicle to try for a view with no obstructions, and found the perfect spot. We could see both leopards clearly, and Langa added to an already superb situation by leaving her mother to pose for us in the sandy riverbed where she then flopped down. When Sibuye joined her cub a while later, Langa climbed a nearby tree where she fed on the remains of an impala. 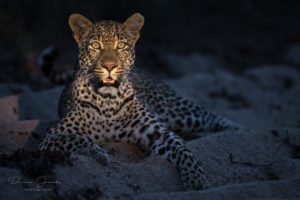 Then back to the Lodge for dinner and preparations for our morning drive.

After a pre-dawn cup of coffee and snacks everyone was ready to head out for another adventurous day. During our coffee time we watched a buffalo in front of the Lodge and when we set out our hope was to find a male leopard that was reported to be around. We visited the area, and other than Plains animals, kudu, waterbuck, there was no sign of the elusive cat.

When a call alerted us to the presence of Wild Dogs nearby we headed in that direction. We followed the dog tracks, and realised that the pack must be close by when hyenas were spotted dragging an impala carcass. They had most probably stolen the kill from the dogs. 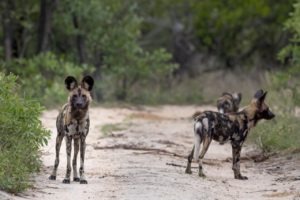 We found the Wild Dogs, but they were winding down, with no running or hunting. Some of them played while others relaxed. There are eighteen dogs in this pack, meaning that there is constant interaction, plenty of activity, and always something to photograph.