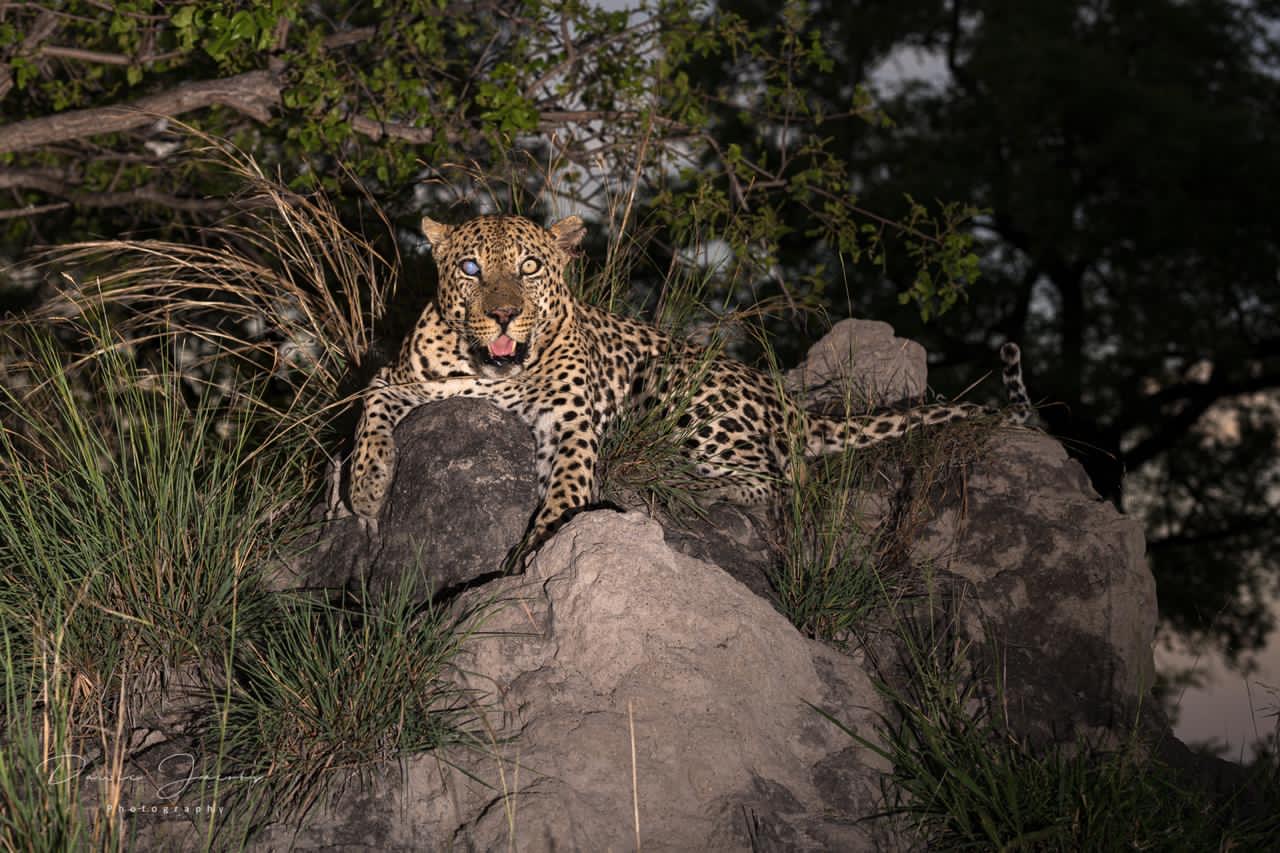 When we started our afternoon drive the temperature had soared to around 40*. We hoped to find the lions again, and found eighteen of them gathered around a buffalo kill. They belonged to two different prides, with two visiting males among the others. Some were feeding, while others lay around and only moved when they needed to reposition into shade. 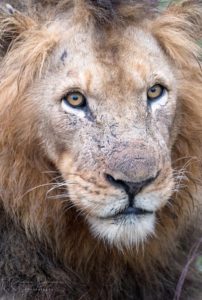 After the lions we joined up with our second vehicle at a leopard sighting. We followed the leopard as he walked along and stopped to drink from a puddle.

Then we heard that Hukumuri had been found. He was very restless, and started to hunt Impala. Up and down termite mounds he went to locate where the Impala were heading, and then he started his stalking again. He eventually tired of this and settled on a termite mound with a beautiful sky as a backdrop. We used fill-in flash to get the best possible images. 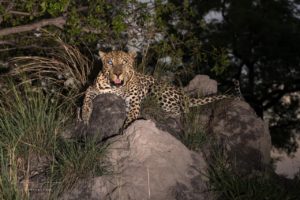 We were still photographing the leopard when we heard that another leopard had been found. This was Tortoise-Pan, and we simply couldn’t miss the opportunity to spend a bit more time with him. He was close to the river where he had recently caught a baby Impala that he now hoisted into a tree before he chose a termite mound for his rest. 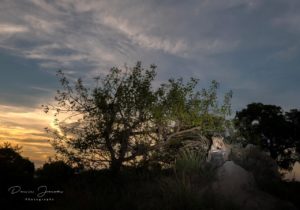 As always elephants and the Plains animals kept us quite occupied. Zebras, giraffe, Impala and others, but as darkness set in we preferred to return to the lions to photograph them in the dark.

It was wonderful that it started to rain as we made our way back to the Lodge. The coolness was so very welcome, and we knew that our morning drive would be a lot more comfortable.

And yes, the morning temp was lovely. We decided to take our two safari vehicles in different directions to cover both the lions and Tortoise-Pan Leopard and thereby to increase our chances of visiting the best sighting. When we reached the buffalo carcass there was no sign of a lion. They had eaten enough and left the remains for the ever ready, ever ravenous hyenas and vultures. The squabbling, flapping, snarling and chases kept the scene moving nonstop.

Meanwhile Tortoise-Pan Leopard was a little elusive at first, but hyenas flocked around where his kill had been. Finally he was spotted as he climbed a tree where foliage camouflaged him very effectively. Luckily for us, he didn’t remain in the tree and came down after a few moments, only to disappear again – this time into a ravine. We couldn’t risk following as the rain made the ground around the ravine sodden and impossible to traverse.

Instead we photographed a herd of elephants, giraffe, zebra, herds of Impala with tiny babies, and a gorgeous regal Fish Eagle. 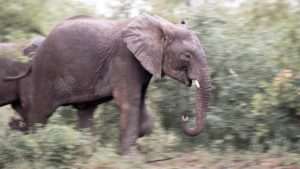 Hukumuri was seen strolling along the airstrip close to the Lodge. We dashed there to catch up with him, and to our total satisfaction he chose an open area next to the airstrip to stop for a rest. 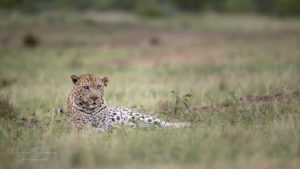 After relaxing there long enough for us to get some superb photos, the leopard wandered off to a drainage pipe that runs under the airstrip. He was so interested in that pipe that we surmised that an animal like a warthog was either in the pipe or had vacated it very recently, leaving traces of its smell. Hukumuri sat there patiently, hoping that the animal would appear.

We left Hukumuri to photograph the lions that had moved away from the kill, and appeared on the far side of the airstrip. We just had time to photograph them drinking water from a puddle before it was time to return to the Lodge.

When we leave the Lodge for our afternoon safari drive, we plan to head straight to the airstrip for the Big Cats …