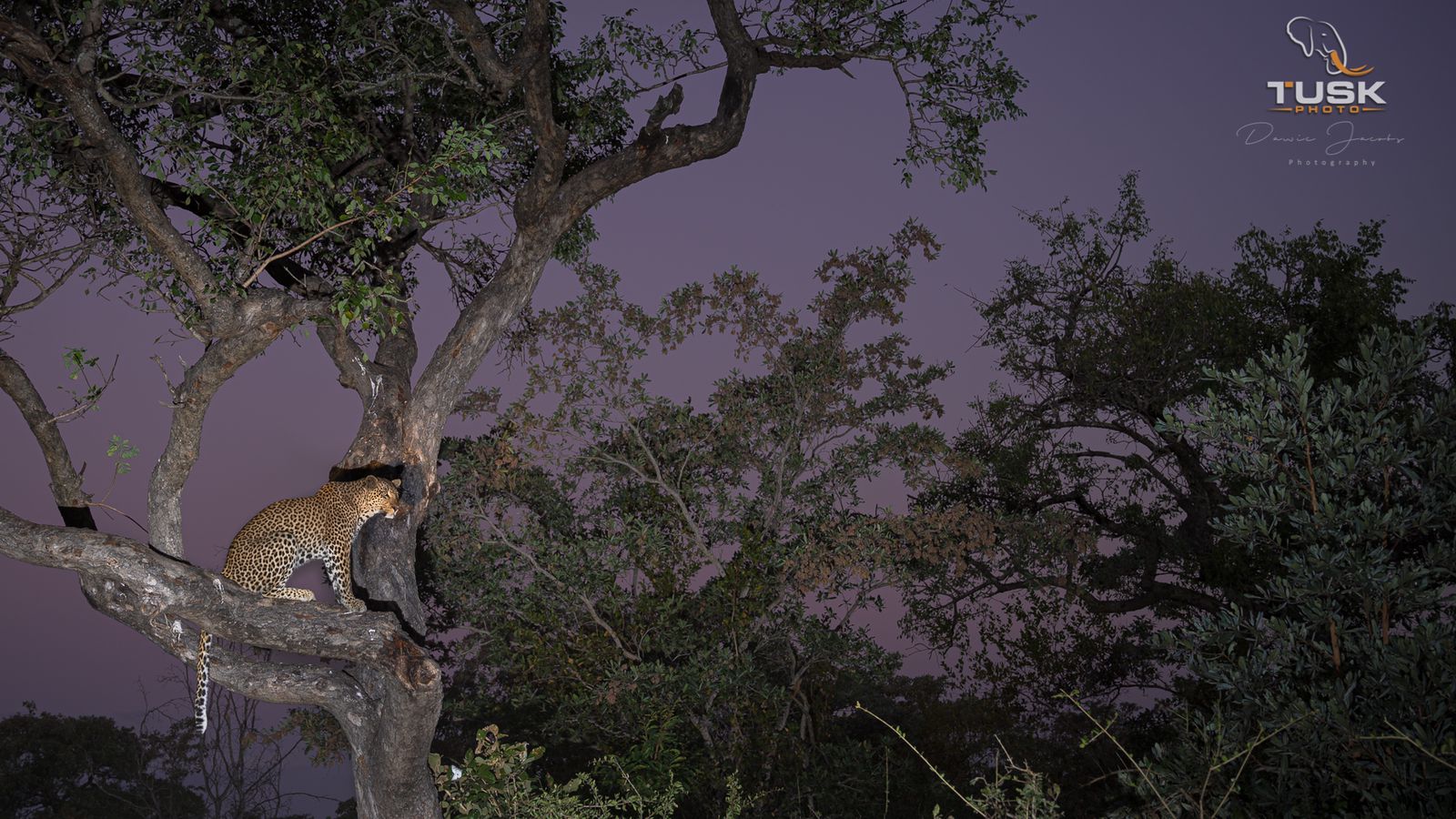 Dawie Shares his Notes and Photographs from the Elephant Plains Photo Safari:

Well, the new safari group duly arrived and of course, after listening to all the anecdotes of the previous days, they really hoped that their experiences would be as good.

And to everyone’s delight, the very first game drive was even more than anyone could have wished for.

We started at the elephant carcass – and because the action there was ongoing, entertaining, and at times quite thrilling, we remained there until darkness and time dictated our return to the Lodge.

The female leopard tried every trick, stealth, and multiple strategies to outwit the hyenas. She tried constantly to grab just a morsel, even a small snack, a bite, from the carcass. 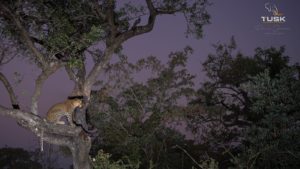 But no, the ever – vigilant hyenas responded each time and she was forced to seek refuge in the tree. From there she looked down at the growing numbers of hyenas. At one stage there were 16 feeding greedily while the cat watched for any opportunity from above.

We photographed the leopard from every conceivable angle, every technique, using flash, spotlights, both flash and spotlight – any approach we could think of … it was fabulous! 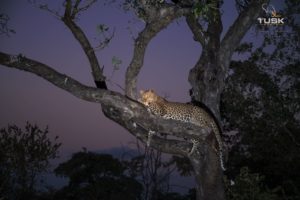 Meanwhile the hyenas not only ate, they growled, chased each other, snarled, and generally seemed to behave as though that huge elephant carcass was not enough to share. These distractions gave the leopard the occasional a quick window of opportunity to maybe grab a bite or two. But no, the hyenas were not letting anything close to what they now considered their own private banquet.

Finally, on the way back to the Lodge for our dinner around a warm fire in the boma, we saw more hyenas and then watched the mysterious shapes of elephants moving so silently in the moonlight. What a perfect ending to the first game drive for the new Guests.

In the morning the unanimous decision was to return immediately to the elephant carcass, where we found that the leopard had finally given up and was presumably searching for a  more accessible meal elsewhere.

But the action at the elephant remains had intensified. The hyenas were still there, but now dozens of vultures had arrived, and the fierce interaction between the two species kept us enthralled until the sun peeped over the horizon to provide light for our photos. Our cameras were ultra busy as vultures came in to land, wstarted squabbling or feeding, or were chased by hyenas. There seemed to be clashes everywhere, with growls, snarls, screeches adding dramatic sound effects  to the ongoing dramas.

We left the carcass to explore a little more. We passed a herd of elephants in an open area and grabbed some great shots before they moved off into some thickets.

Along the boundaries we hoped to spot leopard tracks, but although we actually did find tracks, there were no leopards in sight.

We returned to the Lodge for breakfast, passing plenty of Plains animals along the way …