Sunrise found us out on the plains searching for the mother cheetah with her cubs. We had thought that there were five cubs, but our photos show that there are four. We caught up with them again on the Serengeti border, but on the way we first found a large male cheetah.

The male cheetah was hunting, so we decided to stick with him for a while. He was so hungry that he was literally running after any gazelle, without bothering to stalk. They all spotted him easily and dashed to safety with ease. There were a few futile and very unsuccessful chases. 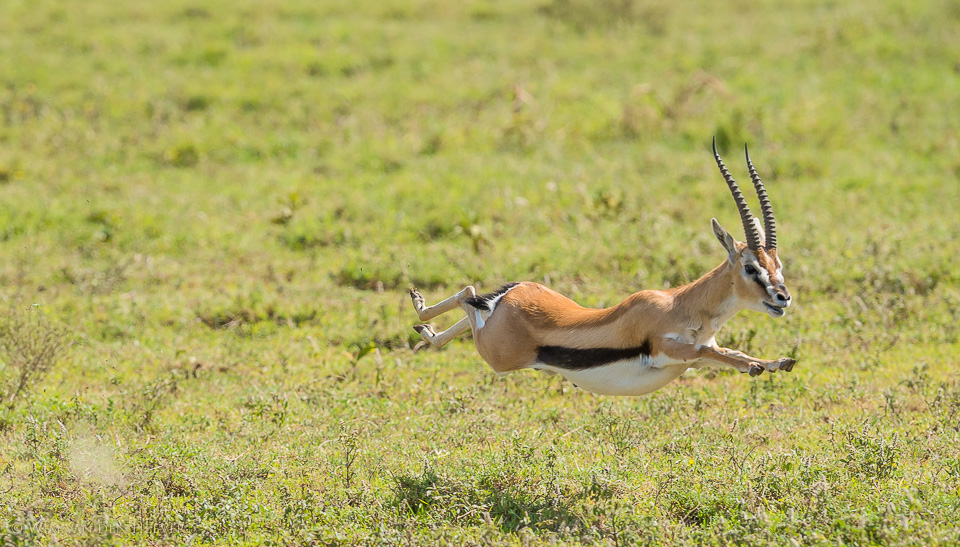 While we sat watching the poor hapless fellow, we spotted the mother with her four cubs also starting to hunt. So we lined ourselves up with a Tommy (Thomson’s Gazelle) that she was stalking. Slowly, carefully, she took her time and after about an hour there was a full, flat-out burst and the Tommy ran towards us with the cheetah fast and furious behind her. Closer – closer – full speed – one more meter, a leap, … and she had him! Right next to us. We were so adrenalin-filled, focussed, and absorbed in the action that many almost forgot to press their shutter buttons. ‘Shoot’ I managed to croak, and almost by reflex the shutter buttons ensured that the action was captured!

Whew! That was exhilaring beyond words!

As the four cubs ran up to join her, they flushed out a Scrub Hare and immediately diverted to chase the hare. Up and down they ran, zig-zagging this way, then that, then veering away from us, then directly towards us. The cat and mouse game with the hare continued as the hare ran back and forth with four inept cheetahs behind it. Their agility was amazing, and finally they caught it, but again did not know what to do with it. Clearly unsure what to do next, they went over to join mom when she called and started to feed with her.

On the way back to the camp we saw a pregnant female cheetah, also hunting. So we gave up thoughts of camp and elected to remain with the cat as she was hunting in earnest. We saw a herd of Tommies not far away, and circled around and waited. Sure enough, she came running in. One Tommy had a young calf that made no attempt to run away. It lay there, hoping that the scant grass was sufficient to hide it. But the cheetah ran straight in and within seconds we witnessed our third kill for the morning.

After lunch we tried in vain to find the mother with four cheetahs again. On our way to Matiti Hills we came across the six lions we had seen on day one here. They were playing, and as we photographed them we received a report that the cheetah mother with two cubs was hunting, so we made our way to that area.

The two youngsters played together in the late afternoon sun before they crossed a large open expanse and started to stalk some Golden Jackals. They surprised them by running into their midst at full force! The two subadults then ran back and forth, knocking the jackals over at high speed, and with incredible flexibility and spryness. It was like a complicated, ultra-fast game of skittles. To add to this, the screaming of the jackals, the dust, the late afternoon sun, the turmoil, the sounds … it was overwhelming! Again and again the cheetahs backed away, only to come storming back at the jackals to knock them flying and then retreat and repeat yet again.

Finally the cheetahs lost interest and sat back to watch fast disappearing tail-between-legs jackal rear-ends! We could do nothing but sit back and laugh and laugh! But we all have great photographs and amazing memories of another incredible day …