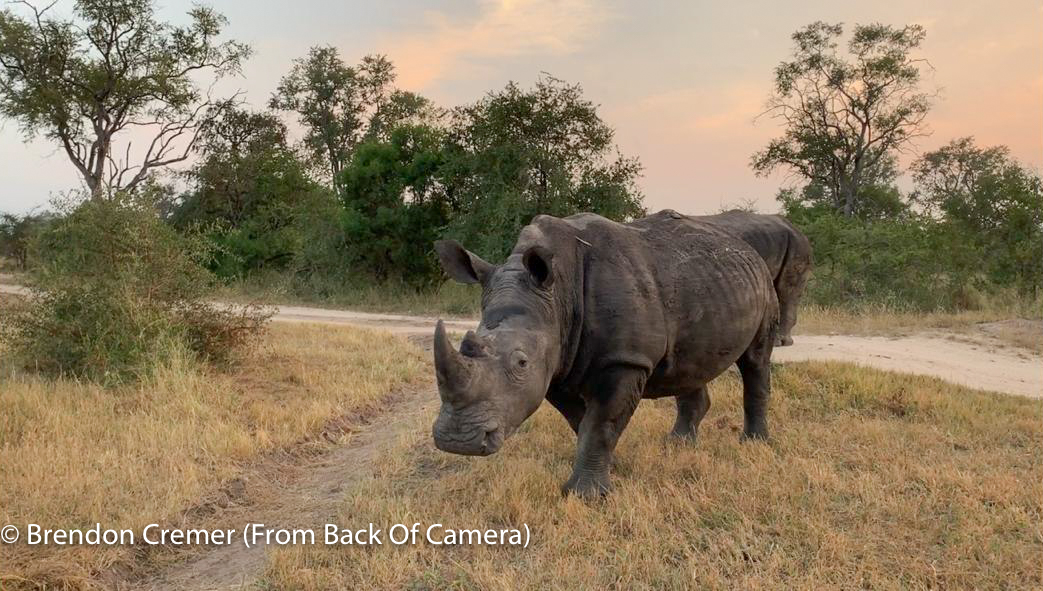 Shortly after we left the Lodge early in the morning we found two Rhinos. They were fast asleep just next to the road, and we were able to photograph them as they woke up. 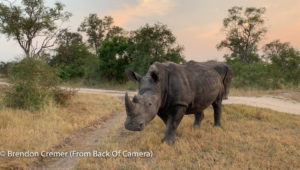 When they noticed us sitting there quietly they ambled up to the vehicle, giving us great opportunities for wide angle work. 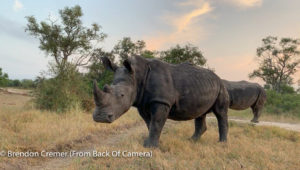 We drove off and were lucky enough to come across another two Rhinos close by. We didn’t spend much time with them as the sighting wasn’t quite as good as the first. (We really are quite spoiled!).

When we found leopard tracks we followed the spoor, but there was no luck there. The tracks actually disappeared into a neighbouring reserve.

But then a very welcome call alerted us to a female leopard with her two cubs. We shot off in that direction, but when we arrived the leopard disappeared into thick bush. Hoping that she would reappear we hung around the area, keeping a keen watch for her, and our patience and persistence was rewarded. The leopard appeared and we spent a delightful morning with her. We followed her and her cubs as they went about their entertaining morning business. They walked around, played, climbed a termite mound, and posed for us in every possible position. They chased each other around, rolled in the grass and sand, stalked tails and seemed to just enjoy the morning sun. 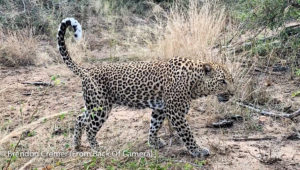 During our lunch break we heard about lions that were moving into the reserve and decided to check on them. On the way we took a quick detour to check on the leopard trio. The mother had left and we could only see one of the cubs. He peered at us curiously through the long grass, and then disappeared. After a few minutes the little head appeared again as the cub looked at us, and then decided to come and see what we were doing. After a quick look, discretion dictated a fast return to the long grass.

We left the cub and as we arrived at the area where we expected to find the lions we came across a solitary young male walking along the road. We spent time with him, but then returned to see if the other lions were around. We found tracks of a larger male and two females that led us towards a pan, and within seconds there was a large, handsome male with two lionesses.

The lions stopped at the pan and as evening approached we took out the spotlights for photography. The lions didn’t remain for too long, and soon after sunset they made their way back to the neighbouring reserve.

It was really special to see such a large male lion in the area, and the sightings of the leopards and rhino meant that we had a very successful day. Although I highlighted the big game, of course we saw plenty of other animals including impala, zebra, and giraffe.