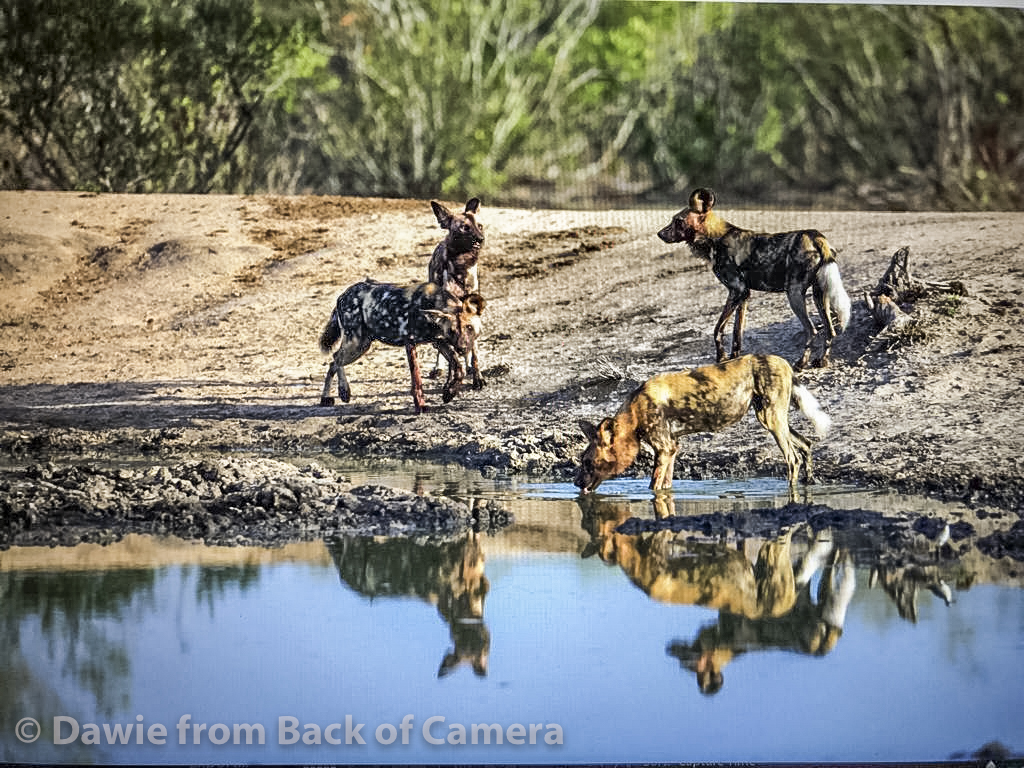 (Photo: Representative only – see videos below …)

Our early morning started close to the Lodge with a search for the local leopard and her cub. We found tracks but before we could really get into following them we received a report about Wild Dogs that had been located nearby. 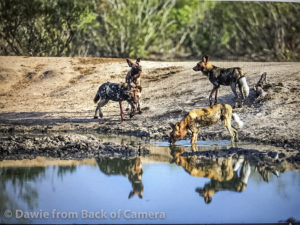 We immediately went to the area and found the dogs with ease. It was very early morning and the pack was hunting. It was exhilarating to follow the dogs as they searched for prey and then chased several different animals. Each time the pursued animals managed to elude the hunters. The four adult dogs with two subadults and a young seven month old pup were determined to get a meal.

A pattern soon emerged. The dogs would chase their chosen prey, and when they missed, they would lie down for a short rest to get their full strength back before they started a search for the next animal to hunt. It was really exciting to watch.

We made way for another vehicle to spend some time with the dogs, and had not gone far before we came across another leopard. We followed this female as she walked along from an area called Marula Bult. Then she glanced into a drainage line where she saw some Scrub Hares and a duiker. She had quite a choice on her menu and we settled down to watch which she would choose to hunt. She stalked the animals and missed them all.

We returned to the Lodge to watch the victorious Springbok Rugby Team, followed by Lightroom and photographic tuition sessions.

As soon as we could set out in the afternoon we returned to the dogs. Their noon siesta was over and they prepared to start their afternoon hunt. We followed them as they searched for and singled out animals, but again they had no success. We followed them until they ran off into a neighbouring territory.

Our second vehicle found the leopard with her cub not far from the Lodge. The leopards had a kill in a tree, but as night approached fast it was time to return to the Lodge again, tired, pleased with another exceptional day and ready for tomorrow …