News of the Day from Villiers:

(All images from back of Villiers’ Camera)

Another full day awaited us when we woke up this morning, starting at the Hyena Den where three very fat, full adults were lying belly-up in the beautiful first morning sun and another lay on the ledge at the entrance to the den. There was a buffalo kill where the hyenas have been gorging themselves through the night.

Therefore, because the four were very lazy and disinclined to move and we decided to move on, and found Tiyane still feeding on the impala carcass. She was undisturbed as the hyenas had bigger and better options elsewhere, and none could be bothered with an impala when there was buffalo on the menu.

Tiyane was very, very full, and first lay next to the kill before getting up to feed again. She stuck her face right into the body of the impala to get to the softer internal organs.

From there we went over to Big Dam where we found the Tsalala Lion Pride lying next to the water on the sand, bathed in golden light and with shimmering blue water behind them. There were two females – including the old lady with missing tail which is just a stump. They were accompanied by three young males.

We parked in the shade to escape the rays of the sun that were getting hotter by the minute, and this proved to be a brilliant move as one by one the lions got up and walked directly towards us to lie next to us in the shady spot. Seeing that they would all come over we decided to move so as to make space for them in that welcome, cooler spot.

We then went to the rocks for a coffee break … a popular stopping place for refreshments. As we enjoyed our delicious rusks we spilled crumbs, and almost immediately Giant Plated Lizards came out from all directions to join our snacks. They are very tame and walked among us, picking up what they could. We were able to photograph them at eye level.

Some of the lizards are about a foot long and as thick as my arm, and looked quite unreal as they strolled, unperturbed, among us as a few Yellow-billed Hornbills came to see what they could grab.

The pool at the Lodge beckoned at lunch time, and we could lie in the water, photographing the Glossy Starlings as they flitted around in the heat of the day.

And the afternoon? Well, I will start with a Big 5 hint!

We took a slowish drive around and photographed a troop of cavorting baboons and a beautiful Nyala before we spotted the first of the Big 5 – a large Buffalo Bull followed soon after by a massive elephant bull. He had pulled down a part of a Knobthorn Tree that obscured part of the road. We photographed him into the sun as he chewed on the leaves and bark of the downed tree. Big 5 Number 2! 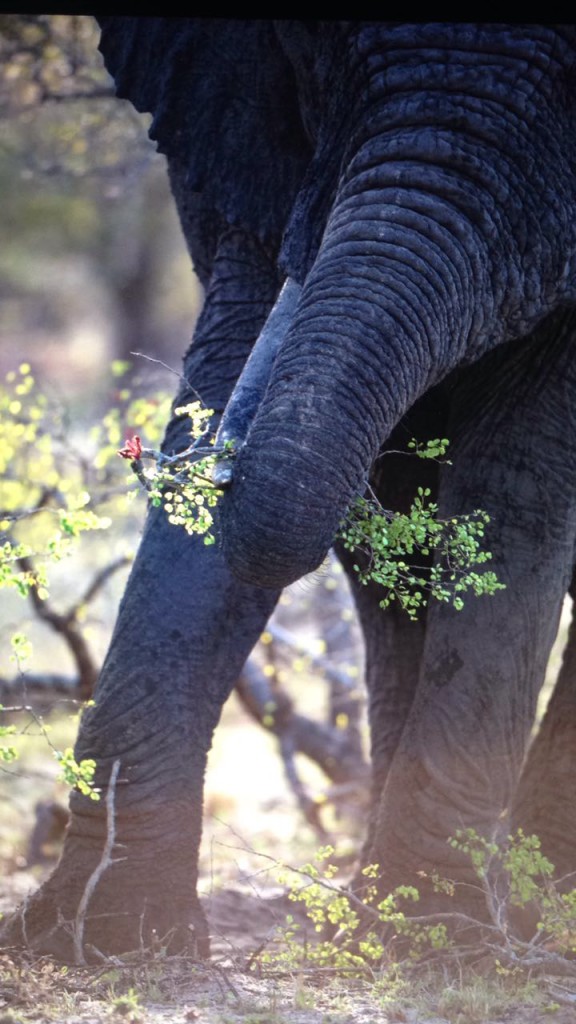 A call came through that a female leopard, Moya, was close to Big Dam. She was hunting and we saw her stalking quite a number of possibilities including a Francolin and a Duiker. We kept up with her and managed some closeups of her curly tail with white tip as she sat next to us. She was Big 5 number 3 …

Then we moved over to Big Dam where Number 4 of the Big 5 still sprawled on the banks. Yes, the Tsalala Lions were still there. We did some photography with backlighting and side-lighting as darkness crept up on us, with the younger males looking very smart with the backlighting shining through their thick manes. When the wind gusted from time to time they aqueezed their eyes tightly shut – and those images joined the others on our memory cards.

And as we sat there the missing members of the Big 5 arrived to drink at the dam – yep – it was two Rhinos, but we did not phorograph them as we do not spotlight rhinos at night.

And as we pulled away from Big Dam, who should arrive but Salayexe. So she really is wandering far each day.

So after a very exciting drive we returned to the Lodge, delighted that we have experienced yet another amazing day in this outstanding place. A cold wind has come up, so who knows what the weather and the animals’ reactions will be like in the morning …