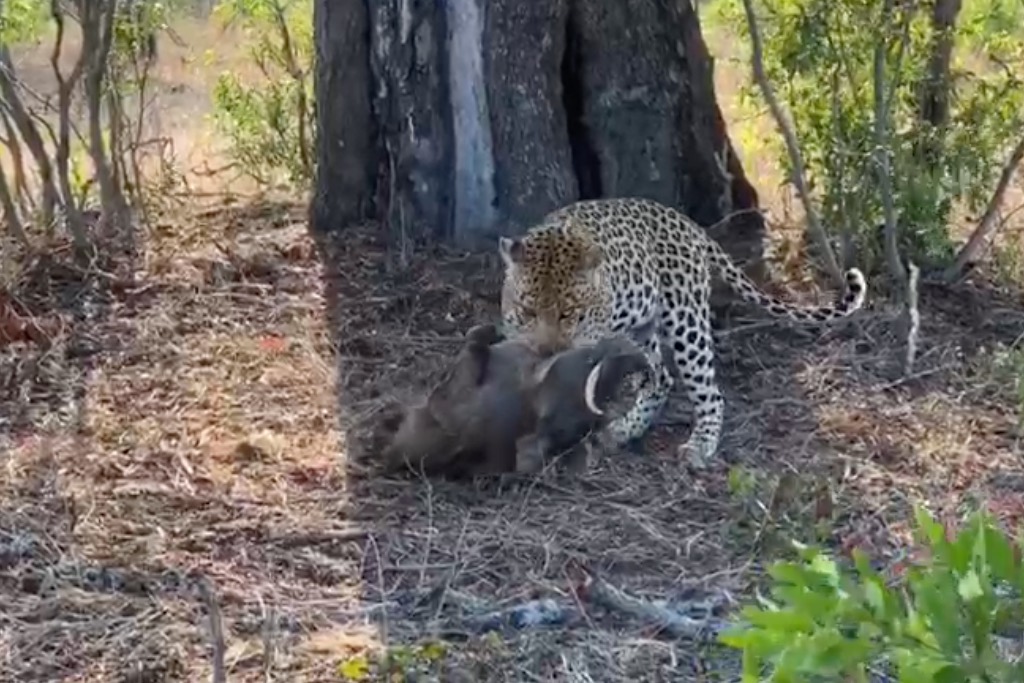 When we started our morning game drive we went straight to where we had left the three leopards with the impala kill – but Hukumuri, Xidulu and the cub had relocated elsewhere. We decided to try and find them, and set out on a search along the fence line and yes! Our instincts and our tracker’s sharp observations meant that it didn’t take long before we found one of the three cats. Hukumuri sat placidly on top of a termite mound. 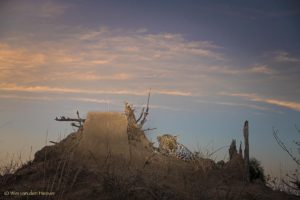 The magnificent male leopard sat on the mound looking down, but showed no sign of action. Wondering what captured his attention we positioned ourselves to watch – and we were perfectly in place, cameras ready, when a warthog family bolted out of their burrow in the termite mound. One movement brought Hukumuri up and at one of the Warthogs. A huge fight erupted, but the leopard would not release his firm grip on his prey’s neck. And the noise! The drama alerted a nearby hyena, and then the scene exploded with added drama.

The hyena grabbed the rear end of the warthog, and we watched in amazement as a tug-of-war developed between the two powerful predators. We almost forgot to capture the moment on camera. Hukumuri managed to get the warthog onto the ground, while the hyena started to eat the still writhing kill. Then Hukumuri started to feed as well, and we were stunned as leopard and hyena, heads alongside one another, fed together! Unbelievable! The two, like best friends, sharing a meal?!

At one point the hyena grabbed a chunk of the carcass and Hukumuri took that moment to grab the kill and drag it to a tree. He jumped into the tree – and fell crashing to the ground. He tried again, and crashed again. The carcass was just too heavy. The leopard checked the hyena and seeing that his opponent/friend was occupied with his chunk of the kill, Hukumuri decided to select a more suitable, sturdier tree. After dragging the carcass to the tree he looked at it, probably pondering his chances, but decided not to hoist the warthog up into the branches. Instead he settled at the base of the tree with his kill. We waited to see if he would actually take it up at some stage but by the time we had to leave he was still on the ground. 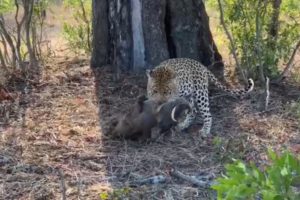 A cold front moved in during the day, and it was lovely and cool when we set out for our afternoon game drive. We found Tiyane, the female leopard, close to the Lodge. She joined up with her cub, and the two walked over to a waterhole where they drank together. Such special photos of the two drinking together! Then they played as they returned to their resting place. They crept, pounced, groomed, rolled, groomed more, and continued. 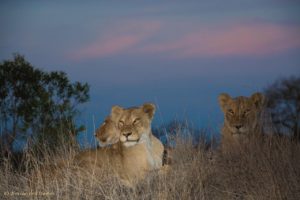 Then Tiyane and her cub spotted something and cornered it! Wow! What an incredible day this was turning out to be … It was a civet! The leopards started to fight the civet, and we could not see how it happened, but somehow the civet escaped. The leopards started to walk through the bush again – and then stopped. What was hiding there? The civet again! The confrontation started again, but it appeared that Tiyane viewed this as a game, and the civet escaped again.

The two leopards moved on, posed for us a few times, and then disappeared into thick bush.

Just then we heard of a pride of lions nearby … six females and eight Cubs. We reached them about 30 minutes before sunset and spent a delightful time watching the cubs as they played. They tumbled, suckled, tried to growl, caught anything that fluttered or moved, and just gave us a heart-warming time.

Before we returned to the Lodge we decided to check in Hukumuri. His kill was finally up in the tree, and we were able to photograph him feeding and then he sprawled on a branch, looking every bit the proud predator that he is. He looked so regal!

So after that incredible day with amazing interactions between different species, whew! What can we look forward to in the morning …