A Rough Night For Impala … 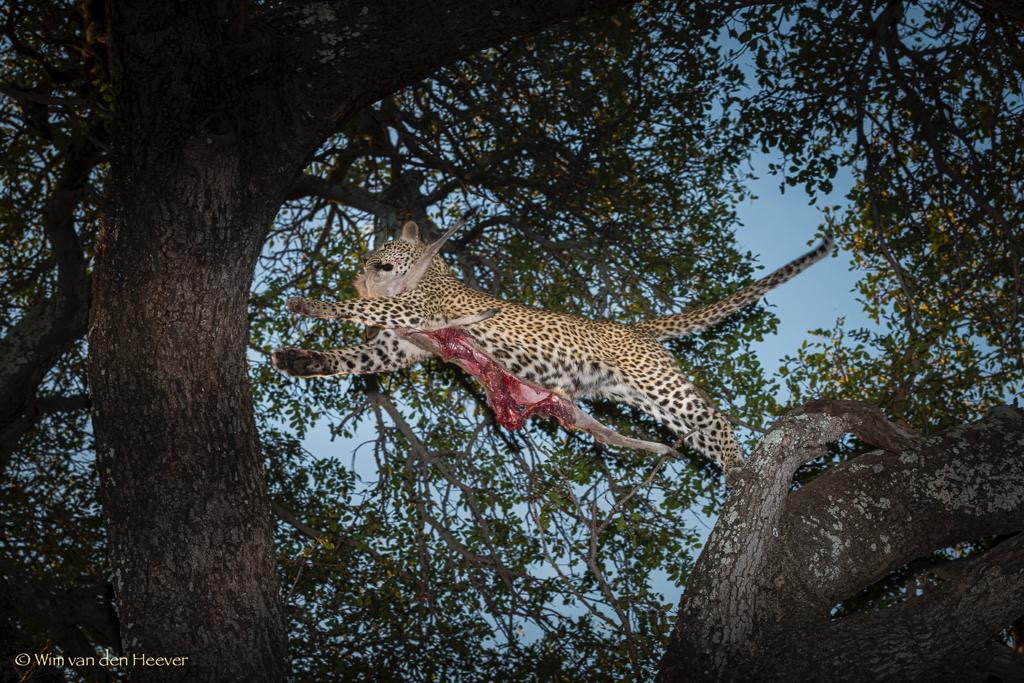 The open clear skies and hot weather is back! And added to that there is no wind. But the up side is that we see plenty of animals especially as they arrive thirstily at the waterholes.

So when we left the Lodge in the early morning darkness we went straight to a nearby waterhole. There were elephants all around the open area, the waterhole, and surrounding the camp.

During the night hyenas had caught an impala, but unusually did not finish feeding on the carcass, so they must have had something else to eat, maybe a second impala, as they looked quite full, and when we arrived we found the clan resting around their kill, but there was no attempt to eat anything.

While watching the hyenas we heard about  lions fairly close by. We made our way to the lions and found them – also with an impala kill. (Impala had a rough night!). The lions fed on the carcass when suddenly one of the lionesses was off! We followed her and realised that she was hunting again. She climbed a termite mound to get a good view, spotted a herd of impala and started to stalk them. 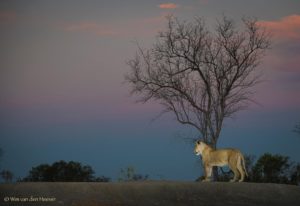 But either she was not all that hungry, or maybe it was just too hot to go hunting, because she gave up and slumped in a shady, bushy area under a tree where she fell asleep.

Hearing that a female leopard had been sighted at Marula Bult which was very close to us we went there. The beautiful leopard was in a Marula Tree, in clear view, and we captured dozens of those iconic leopard in a tree photos. 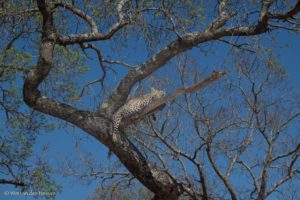 The leopard also had a kill. In fact, she had caught the first prey earlier, went to fetch her cub to join her, and on the way she made another kill! (So – a Really Bad night for Impala!) The heat somehow makes hunting easier for those that brave the temperature. She was very content with two kills. She posed for us and gave us plenty of time for different photographic techniques. 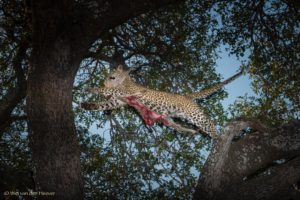 Eventually the leopard jumped out of the tree and we returned to the Lodge to say farewell to the departing guests and to welcome the new arrivals. As one can imagine the newcomers were very keen to catch up with all the amazing action, and to start their own unforgettable experiences.

We returned to the female leopard but she had moved to a nearby dam where we located her with one of her kills and accompanied by her cub. The two cats were very, very hot and very inactive.

We went past the lions, but as they were also not moving we started to move away. 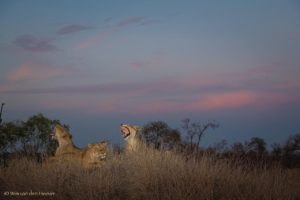 Just then one of the lionesses got up and strolled down to the dam for a really needed long drink. She looked beautiful in the evening light, with a colourful sky as a backdrop when she stopped to look around on the dam wall. 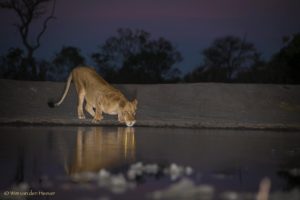 So after a very successful safari for the first group of guests, and a first game drive with plenty to see and photograph, we are back at the Lodge, enjoying our own drinks, and hoping for some overcast weather to roll in …